My father is now a published photographer.
Back in March I got an email out of the blue from someone asking whether I’d be interested in publishing some of my dad’s 1959 Le Mans photos in a book. Ha ha, very funny I thought. Then I googled the chap’s name – Quentin Spurring. It turns out he’s a motorsport author who has published books like “Le Mans 24 Hours: The Official History of the World’s Greatest Motor Race 1960-69” and 1970-79, and I realised that this was a serious query and he must be doing the 1950-59 version.

I didn’t take long to decide that yes, I’d be happy for his images to appear! To cut a long story short, The Official History 1949-59 has just been published and I received a complimentary copy today. It’s lovely, and the 9 of my dad’s photos have come out beautifully – including one on the back cover, one as a two-page spread as the title page for the 1959 race and another on a full page. 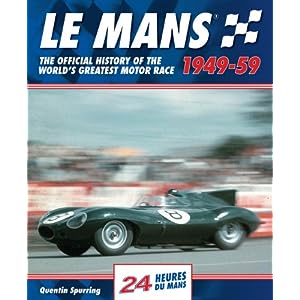 Isn’t the internet a wonderful thing?