Skip to content
28/08/201012/04/2020 By shendyNo Comments
The Masque Theatre in Northampton put on an open-air show every summer, usually Shakespeare. Traditionally it was always held in the courtyard of the museum in Abington Park, but this was closed for a number of years over the last decade or so. However, they’re back there now, which means that the actors once again have to battle to be heard over the peacocks from the small aviary just behind. Assuming there are still any there – I haven’t lived in Northampton since 1992, so I’ve no idea whether there are or not! 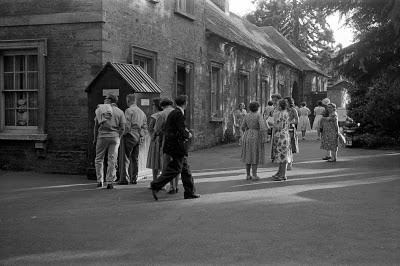 As this is 1961, it must be Much Ado About Nothing. If I recall correctly, the little ticket booth is green, and always saw additional service in the Borough Show in Abington Park a week or two later. I spent many summer evenings around there, often selling programmes, as my father was generally in the play and my mother helped out, sometimes prompting, sometimes in the ticket office. Quite possibly sometimes both.

These days, I don’t do Shakespeare – I suspect those summer evenings in the 1970s are a major reason why.
And just sometimes, it doesn’t rain.