Skip to content
28/08/201008/04/2015 By shendy2 Comments
What do you mean I last posted in March? It wasn’t that long ago, surely? Oops…
Now, where were we? Ah yes, 1961, and it’s Le Mans time again – for the third and final time, my father and his friend Bill went to Le Mans for the 24 hour race.
This, believe it or not, is the start of the race. The drivers have just run over from the bank in the foreground and are just getting into the cars. And yes, the spectators really are that close. The two cars are Aston Martins DB4 GT Zagatos. #4 is Roy Salvadori & Tony Maggs’ car, while #5 is Jim Clark and Ron Flockhart. 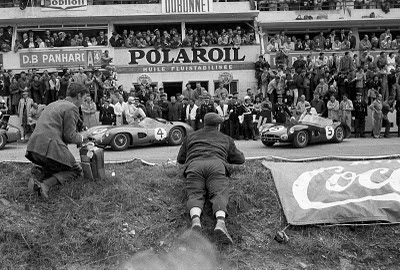 This is taken from directly above the pits – the Ferrari garage in this case. This is #10, a Ferrari 250, with Phil Hill getting in. 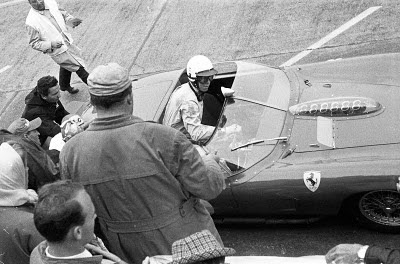 Night view from above the pits, with Bill watching. 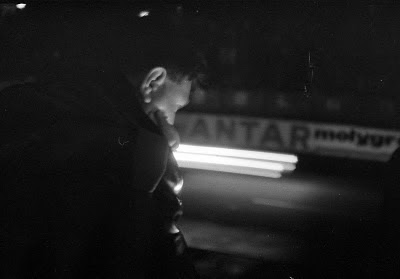 The Salvadori/Maggs Aston Martin, in the process of retiring, 19 hours into the race. There is a sequence of several photos, showing the car coming into the pits, mechanics attending to it as usual, and then the appearance of the rather ominous leak at the back. Then there are shots of concerned mechanics studying the rear end, and finally the car being wheeled back into the garage. Fuel leak apparently. 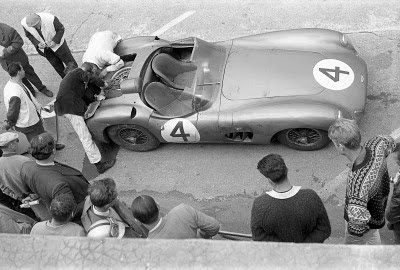