Similarly to the production that the Imperial College Drama Society put on in Cheltenham in 1954, they did the same in Maidstone in 1955. 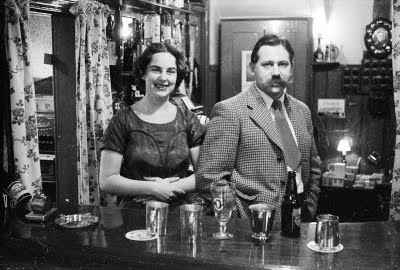 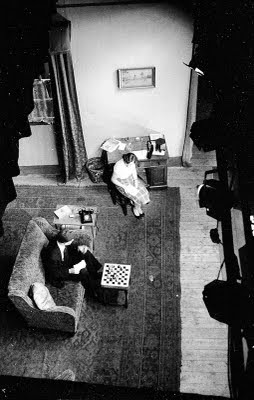 Les and Ursula on stage

I think that the first shot is of the landlord & landlady in the pub that they adopted during their stay – there are several photos that appear to be in the pub.
I suspect that my father wasn’t acting in this particular play, as this was taken from above the stage. I don’t know what play they were doing – surprisingly enough his records don’t say.

I suspect the reason I never really became interested in the theatre (drawing a discrete veil over my appearance as a Munchkin) is that I was subjected to too much Shakespeare as a small child. My parents were (and my mother still is) long-standing active members of the Masque Theatre amateur group in Northampton, and they were always involved in the annual open-air productions. Being too young to be left at home, my brother and I spent many interminable summer evenings hanging around Abington Park trying to think of something interesting to do. We must have been too well brought up, as otherwise we’d have been off nicking hubcaps or something like that – although Abington is too nice a part of Northampton for that sort of behaviour thank you very much.