In 1953, my dad went cycling in the Alps with a friend (I don’t know his name unfortunately). It seems that they read an article about a tour over some of the Cols that the Tour de France used, and they decided to do it – without really knowing that much about what they were letting themselves in for. Information about the Tour was pretty scarce in those days, although he did have some wonderful French Tour magazines from the 50s.
They got the train down to Grenoble, then cycled over the Lautaret, down to Briancon, over the Izoard, then the Col du Vars and the Col de la Cayolle – one Col per day – and then about a 50 mile coast down to Nice.
They obviously passed very close to the bottom of Alpe d’Huez as they went through Bourg d’Oisons, but didn’t really know that it existed or what a famous climb it would become. The Tour went up the Alpe for the first time in 1952, but didn’t go back until the 1970s.
I’ve seen photos of the roads in the 50s, and they were basically gravel tracks, not the smooth tarmac we have now. Incredibly, he didn’t get a single puncture – his front tyre went down on one descent, but he couldn’t find a puncture (once the rims had cooled down enough to take the tyre off!), so it was probably just down to the heat from all that braking. 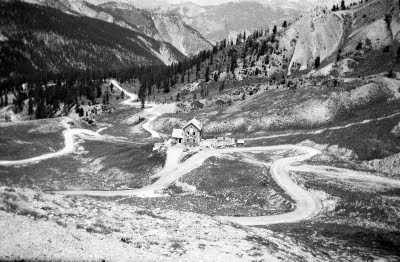 Refuge Napoleon on the north side of the Col d’Izoard 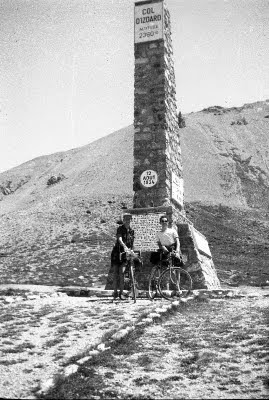 The top of the Col d’Izoard

Over the course of about 10 years, we vaguely spoke about going back to the Alps, and we finally got round to doing it in August 2008 – ostensibly to celebrate my 40th birthday, but also to take him back to the Izoard, 55 years on. We also took in the Galibier and, of course, Alpe d’Huez. We stayed in La Grave, where my parents also stopped on their honeymoon in 1963 – I’m sure there will be photos from that trip to come at some point!
On the way down the Lautaret we stopped at one of the tunnels that he remembered riding through, which we were able to walk into as the road now bypasses the rather narrow tunnel. Similarly, on the way up the Lautaret from Grenbole there are some narrow precipitous roads that are fortunately now bypassed by nice wide tunnels.
Refuge Napoleon on the Izoard is still there, but it’s now about 3 times the size, and there are now a few buildings at the top, where there was just the monument in the photo. We also stopped at the Casse Desert on the south side, which he particularly wanted to see again.

He died suddenly at the end of November 2008, and looking at his holiday diary for the trip, he said that he could die happy now that he’d been back – although he didn’t plan on doing that just yet…